In March 2010 the Council approved and adopted the Public Realm & Movement Strategy for Bath City Centre entitled ‘Creating the Canvas for Public Life in Bath.’ The Council then established the Bath Pattern Book to deliver the strategy. A series of on-going improvements to streets and public spaces are envisaged across Bath city centre the first of which was the High Street and Northumberland Place Public Realm Improvement Project which also served as a test of the framework guidance for the draft Pattern Book.

The High Street Public Realm Improvement Scheme was completed in June 2013 and was part-funded by the Bath Transportation package, a £27m package of measures funded by the Department for Transport.

Works commenced with the refurbishment of adjacent Northumberland Place where the space was resurfaced with new pennant stone paving and new street furniture was installed. With the support of the traders, the aim was to de-clutter the space, increase footfall and improve the experience for pedestrians. Works to the High Street followed on directly after the completion of Northumberland Place.

The High Street is a very important space in the City Centre, however, it did not provide a welcoming or enjoyable experience for pedestrians or bus users. The combination of narrow footways, busy bus stops and high footfall often resulted in overcrowding and the quality of finishes in the pedestrian areas were generally poor. The new scheme for High Street created a more pedestrian friendly environment through the expansion of pedestrian areas and the improvement of existing signalised crossings, including an extended crossing area between the Corridor and Guildhall. Access to Cheap Street was improved with a natural stone space shared by pedestrians and vehicles. New pennant stone paving was provided along High Street’s pedestrian areas to provide a high quality surface finish with reclaimed pennant stone paving being used in front of the Abbey to achieve a uniform finish in that area. New street furniture, including new bus shelters, wayfinding signage and cycle stands were also installed to finish the scheme. Together, the measures have created a more pedestrian friendly environment on High Street, enhanced the streetscape and afforded better access to public transport.

The Stall Street and Lower Borough Walls pedestrian improvement scheme was completed in late 2015 and was part-funded by the Bath Transport Package access restrictions. This busy thoroughfare carried around 25,000 pedestrians per day, by cutting vehicle traffic the Council was able to make it a far more pleasant space for local people and visitors to shop and socialise. Drawing on the same guiding principles as the High Street scheme, new traffic restrictions were implemented during core shopping hours (10am to 6pm), a new level surface was paved with natural stone materials and new street furniture added in key places. 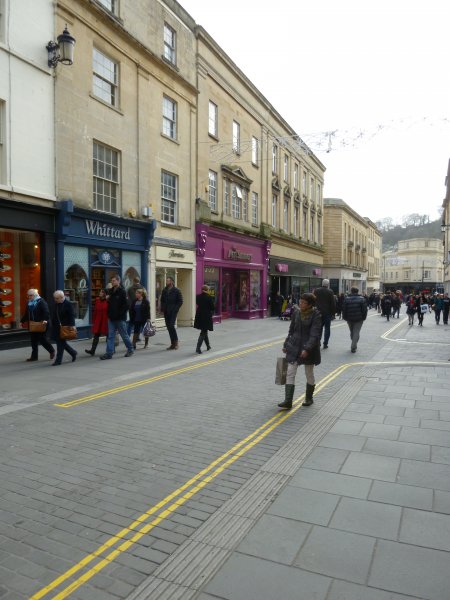 The Seven Dials cyclist and pedestrian improvement scheme was completed in summer 2015 and was funded by the Department for Transport's Cycle City Ambition programme. Seven Dials is at the historic west gate of Bath where seven routes met and lies to the west of the city's main thoroughfare. The Council wanted to reduce congestion and allow people to move around more freely in Bath, this project aimed to improve the area as a public space with a greater focus on cyclist and pedestrian needs through the use of shared space, which ackowledges the significantly higher pedestrian to traffic ratio. Conventional road signage is removed and perceived hierarchies between users are broken down, enabling greater freedom for pedestrians to use the space. This is encouraged through the use of surfaces and street furniture which reduces the distinction between road and footway.

Future public realm improvements will be implemented where external funding can be sought and applied.

Following on from recent public realm improvements to the Seven Dials and Kingsmead Square area the Council's RegenerationTeam are linking with the Saw Close developer to improve the public highway from the back of the pavement outside the Theatre Royal and adjoining businesses to the public realm work to be delivered by the Casino development. This £2.15m project will be part funded by the West of England Local Enterprise Partnership Revolving Infrastructure Funding.