The regeneration of Keynsham - Building a prosperous future for local people 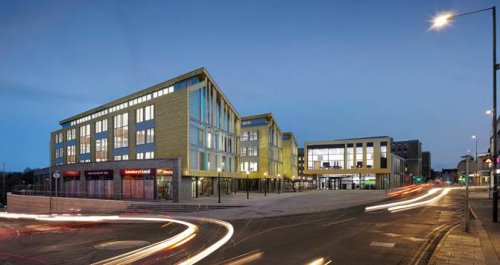 We have worked with the Keynsham community to revitalise the town with new jobs, new homes, and a revamped town centre. Our plans which included making better use of the existing town hall site have improved the town centre and encouraged more private sector investment into Keynsham.

The new development will provide:

The new building's known as the Keynsham Civic Centre and incorporates Bath & North East Somerset Council’s Offices, offices for the Police and Sirona Care and Health, the new library and One Stop Shop and retail units. The Council has also confirmed that the new street created between the buildings is called Market Walk, which links to the history of this part of the town, as well as looking to the future when there will be market stalls at this location.

Keynsham Civic Centre will be amongst the most energy-efficient office developments in the country with one of the largest council-owned solar panel systems in the UK now completed.

A Sainsbury’s Local was confirmed as the first letting for the Keynsham development, and will create 20 to 25 full and part job opportunities.  The Council has confirmed that Loungers cafe names Bonzo Loumnge has taken the unit behind Sainsbury’s, overlooking the park and a further local retailer is relocating from Riverside. The Council is proactively marketing the remaining units and negotiations are underway on a number of these.

Following the approval of planning permission in October, the demolition of the current site started in November with the Chair of Keynsham Town Council pulling down the first building. We also announced around fifty local people will benefit from new jobs, training, and education opportunities over the next two years through the construction. Work continues to be developed on a highways scheme to help improve access and reduce congestion.

Additional free parking in The Labbott car park has been available from July 8th 2013. Find out more in our news story.

The top level of the car park has now reopened.

A map of Keynsham car parks is available here. 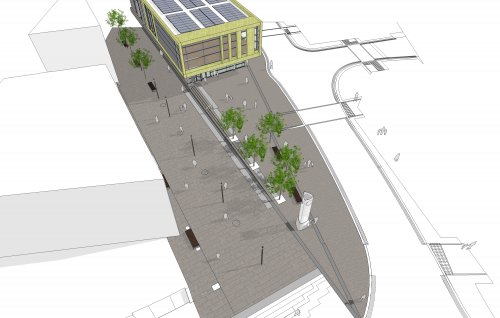 The project is overseen by the Keynsham Arts Advisory Group, with members representing the local community, working with B&NES Arts Development and Project delivery.

‘Meet the artist’ events took place in Keynsham during late September & October 2014 as well as working with specific community groups.  These sessions invited people to contribute ideas, memories and stories, which will inform Sebastien’s designs for the ‘patchwork’ of the clock tower sides.

The construction of the clocktower is solid granite plinth with polished finish, and polyurethane resin encased stained glass and supporting framework of stainless steel.  The design was selected following public consultation and voting in May 2014. 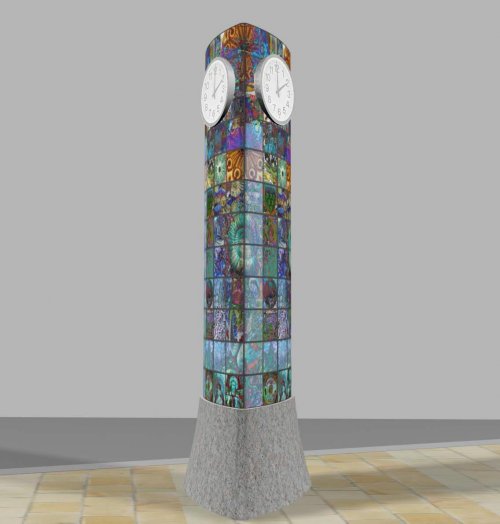 Complementary to the Clocktower, and with additional funding from B&NES Arts Development, we have just appointed an illustrator David Mackie to work with all the Keynsham schools.  Each school has been allocated a century or time period and the children will work with the artist, who will then interpret their ideas into finished illustrations.  The Timeline will be on the outward-facing side of the planters going up Bath Hill steps, and people will be able to explore Keynsham’s history from the stone age to the present day, ending with a map showing the expansion of the town.

Most staff have now moved into the Council’s new Civic offices in Keynsham with the last staff moving in, later in the month. The new ground breaking design is not only one of the most energy efficient buildings in the Country it is also a wonderful airy space to work. Staff love the building which is purpose designed to encourage the new flexible working arrangements, hold meetings or to work more informally in the various break out areas or simply enjoy a coffee from the new café before continuing with daily routines.

Externally, most of the work to the hardscape has been completed and the finishing touches such as the benches are currently being installed, with the landscaping soon to follow with a number of trees in the main area and shrubs in the terracing leading down to Bath Hill.

The One Stop Shop was the first part of the scheme to open at the end of October with the library relocating from Riverside to the building and the Partners taking up residence and providing an essential service to the community.

The main office and retail building is configured in two blocks with retail occupying most of the ground floor of the North Block (with 3 larger retail units) and a further 7 units in the block separated by the aerial walkway, the majority overlooking the One Stop Shop. There are also a further two units at lower ground level fronting onto Bath Hill.  Just over 1,681.5 sq m (18,100 sq ft) of retail accommodation has been constructed.  This comprises 12 retail units of varying sizes ranging from 69.7 sq m (750 sq ft) to 436.6 sq m (4,700 sq ft), although there will be at least 2 that will be let as double units.

The development now has its first retail opening with the café bar, Bonzo Lounge, opening on 12th November. The opening night was an overwhelming success with the premises packed and guests spilling out onto the terrace overlooking Memorial Park. Sainsbury’s, who have also completed their fit out, will be putting the finishing touches to their store and should soon to be stocking shelves in preparation for a December opening.

Inside the smaller retail units, ‘white box’ fit out works will be carried out to assist local independent retailers, which includes installing toilet and kitchen facilities.   Of these units, 4 are in solicitor’s hands (Units 6/7, 8 & 9), whilst terms are being finalised for the letting of a further unit on Bath Hill (Unit 11).

Marketing is gathering momentum on the remaining 3 units which account for just 373.9 sq m (4,025 sq ft) of the total retail floor area, with a number of viewings carried out. The Council’s letting agents are continuing with their targeted marketing campaign of these units. The great news is that over 70% of retail floorspace is either ‘let’ or ‘under offer’, which is testament to the superb location, innovative design and the confidence being felt by retailers in the development.

As we sign letting agreements we will make joint announcements with the new tenants indicating what is planned and at the same time, if possible, the proposed opening dates.

What else is planned in the town?

We are working closely with the community and private sector partners on plans to redevelop the Somerdale site. Once finalised, the plans will provide even greater opportunity to enhance the town.

To celebrate the fact we are months away from completing the £34 million regeneration of Keynsham town centre, we've produced a video giving a behind the scenes update of the progress on-site so far. Remember to take also look at our photo gallery for the latest images of progress on site.

See the our Keynsham Regeneration project 6 month time-lapse which shows you exactly how the site changed during the initial months of the project.

Updates for key announcements will be issued by the Council to the local media. People can also see these via: