Role of the Chair of the Council

Since the council services are being streamlined and re-structured to produce a more effective and efficient service to the community, the role of the Chair has changed.

The main focus is on the core activities which define the nature and role of the office:

Sharing commemorative events, such as Remembrance Sunday, supporting our Armed Forces Week, and assisting veterans through the ‘military covenant’

Welcoming royal visitors, members of the government and civic dignitaries

These categories will normally be definitive, but in exceptional circumstances support may be possible. If you have an event that meets one of the criteria outlined above, please contact the Chair's Office at Chairs_Office@BATHNES.GOV.UK and we will review any requests we receive.

Unfortunately it is not possible for the Chair to continue fund-raising for ‘the Chair’s charities’ but the Community Awards will continue.  It is with regret that receptions and exhibitions have come to an end.

It should be noted that while the Chair will continue their duties as a ward councillor, hold surgeries for residents and so on, the position of Chair is strictly politically neutral, and the Chair will not be signing any petitions or joining any public campaigns.

The Awards recognise volunteers, community leaders, community organisations, carers and local businesses and highlights the positive impact they make on others and the wider community. 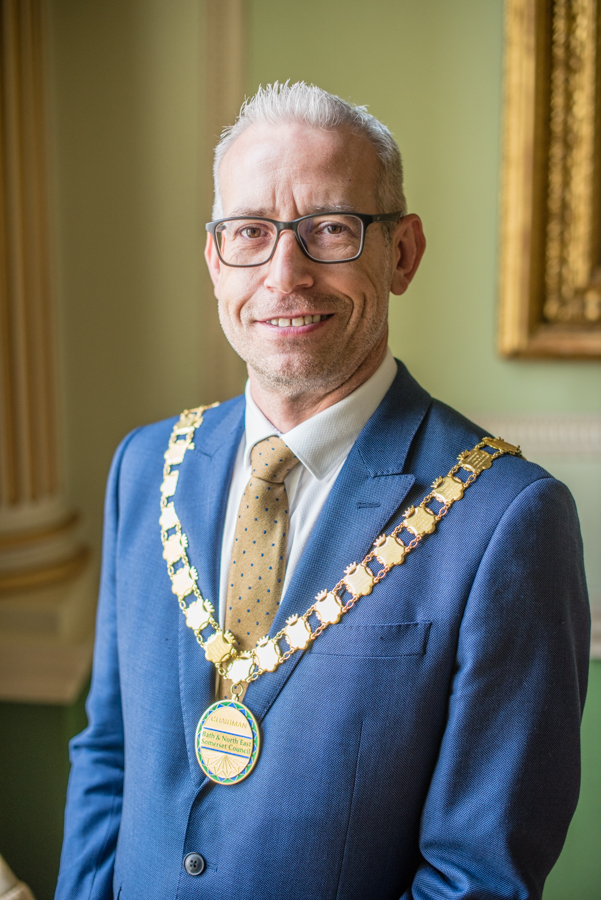 Shaun was first elected as a councillor to represent Oldfield Ward in 1999, when he lived just off Moorland Road, and served three terms up until 2011 when he retired for four years. Shaun was re-elected in 2015 for Oldfield Ward and again in 2019 for the new Oldfield Park Ward. During these 22 years serving the residents and business of Oldfield Park, he has been a member of the Community, Culture and Leisure Committee, the Resources Overview and Scrutiny Panel, the Schools Organisation Committee, the Bath Area South Local Committee, the Corporate Audit Committee, the Regulatory (Access) Committee, the Standing Committee of the Charter Trustees of the City of Bath and more recently the Chair of Avon Pension Fund Committee Investment Panel and Vice-Chair of Avon Pension Fund. Shaun has previously had the honour of serving the city’ as first citizen and the 783th Mayor of Bath. He also served the city as Deputy Mayor of Bath in 2004, and again in 2015.

Previously Shaun has been a member of Avon Fire Authority and served on its Appointments Committee. Previously he has served as a governor of City of Bath College and Bath Spa University, a trustee of Off the Record (an information, support, advice and counselling service for young people), Chair of Hillside Hall Community Association, the local co-ordinating committee of the Duke of Edinburgh Award scheme, and Chair of the Oldfield Outlook Regeneration Scheme Steering Group.

Shaun is the Council’s Member Advocate for Engagement with Students and continues to be a lay member of the Board of Trustees of Bath Spa University Students’ Union and a member of the University of Bristol Court. In 2002, Shaun established and chaired the Council’s Student Liaison Committee until 2007, when the SLC was replaced by the Student Community Partnership. He continues to be a member of the SCP and Chair’s its Housing Group. He was a founder member of the Councillors Campaign for Balanced and Sustainable Communities, which succeeded in helping to change national planning legislation about Houses of Multiple Occupation. More recently he has secured three year CIL funding for two part-time Community Wardens to join the SCP and who will be doing their rounds around Oldfield Park engaging and support students and other residents in the local community, tackling issues such as noise, litter, poor waste management and bad landlords.

In 2002, Shaun succeeded in his campaign for Bath and North East Somerset Council to become one of the first local authorities in the Country to establish a Partnership Register for gay and lesbian couples, the forerunner to today’s equal marriage passed in 2013. Shaun and his husband, Sean, now live in Timsbury, where Sean is a member of the Parish Council, alongside serving as a Justice of the Peace, and this career within the Civil Service.

Since graduating in 1993, Shaun has spent his career in working in both further and higher education. Shaun is currently the Student Engagement Manager at the University of Bath, where he has worked in various capacities since 1999, including within the Students’ Union. Previously he has worked as the Manager of the Students’ Union at City of Bath College and was an elected regional sabbatical officer for the National Union of Students, when he was based at what was Norton Radstock College. Shaun moved to Bath from Totnes in 1990 to study Human Geography and Modern European History at what is now Bath Spa University. Following his first degree, Shaun was elected Vice-President of the Students’ Union. He studied for a Masters in Social and Market Research at the University of Westminster.

He grew up in South Devon, attending King Edward VI Community College in Totnes. Shaun spent a few years of his childhood living in Karachi, Pakistan, where his father was working. He was a keen rugby player, and when he graduated from University, he joined local side Stothert and Pitt RFC, where he played for over 20 years. Shaun has also played for the Village Spartans RFC, a gay rugby team based in Manchester, for 12 years. He is a keen fan of Bath Rugby and has held a season ticket at the Rec for many years. Shaun also enjoys skiing, swimming, and cycling.

Sarah was elected to represent the ward of Twerton in 2019 for the Liberal Democrats and became the Member Advocate for Accessibility in 2021.

Sarah was born in Fairfield Park, Bath and educated in local schools in Larkhall, and has lived in Twerton for over 20 years. Sarah is married with 2 children and is a Finance Administrator for a computer software company where she has worked ongoing for over 30 years.

Sarah has been a strong campaigner against school closures, she campaigned to get additional parking for residents and she also secured funding to get Kelston View resurfaced, which has led to her continuing to actively campaign to get more roads and pavements around Twerton resurfaced.

Sarah co-founded the Twerton & Whiteway Wombles litter pick group; she has organised the Community Speedwatch group and is a governor at Twerton Infant School.

Her key priorities are Accessibility, Education and Housing, she is keen to make sure every child is given fair and equal access to well-funded education, get more family homes for local residents and would like to see the whole area fully accessible for all.

She uses her hobby of knitting to raise money for various local charities and provide reading aids to local schools and nurseries.