For England as a whole, the average length of stay was 3 nights, average spend per trip, £167.

Overall, numbers of domestic trips into Bath and North East Somerset as well as length of stay and average spend has decreased from 2006 to 2010.

Internationally, the US remains a key inbound market for Bath and North East Somerset although the European territories of Germany, France and Ireland also remain strong, while Australia and the Far East are increasingly important and present major growth potential. 8

The 2011 Great Britain Day Visits Survey estimated that Bath & North East Somerset attracted 6.66 million day visits in 2011, with total spend amounting to £221.73 million. Detailed visitor information is not available at this local level but at a national level, visiting friends/relatives was the main activity for 27% of visits. The next most popular activities were going out for a meal (10%), going on a night out (10%) and undertaking outdoor activities (8%).  Average claimed distance travelled for all UK destinations was 42 miles.  Average spend per tourism day visit was £34.10

Historic England carries out a number of studies into the historic environment at a national, regional and local authority level:

Bath is a UNESCO World Heritage Site. Bath is widely recognised as a premier city break destination both domestically and in key overseas markets. VisitEngland, the national tourism body, has endorsed this. However, York, Oxford and Chester rank higher than Bath as contemporary destinations. 14

The top ten visitor attractions in Bath, together attracted over 2 million visitors in 2011. Between 2007-2011 the number of visits to attraction has increased by 25%.  This growth occurred largely between 2010 and 2011 when visits increased by 18%.  The most significant increases (in percentage terms) came from The Holbourne Museum of Art (following major re-development), Horseworld, the American Museum and Bath Abbey.

While Bath’s performance has fared comparatively well, in recent years visitors are spending less per head. 17

There is a clear seasonal visitor and accommodation peak in the summer months, particularly for attractions. July and August together account for 27% of annual visits to attractions.  Accommodation occupancy is more evenly spread throughout the year, although with January to March standing out as being a quiet period. In total there are 424 accommodation providers in Bath, providing stock of over 9,000 bed spaces. 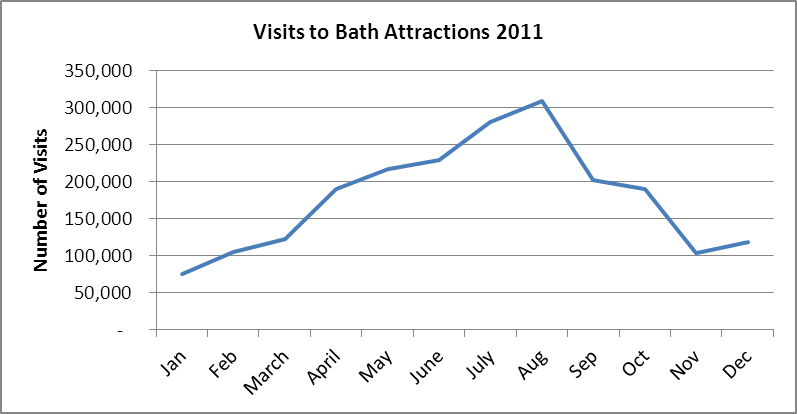 The Bath Visitor Survey, conducted between June and September 2010, provides a wealth of information on visitor characteristics.  Some selected points are given below, together with reference to equivalent all-England figures if available from the GB Tourism Survey 2010.

Research informing The Destination Marketing Strategy for Bath and North East Somerset 2012-14 indicates that on the whole those who visit have a very positive view of Bath with few negatives:

What can we realistically change?

The Destination Marketing Strategy for Bath and North East Somerset 2012-14 outline targets to: