The 2019 Indices of Deprivation were published on 26th September 2019. Explore the data using our interactive dashboard

The impacts of Socio-economic inequality

Locally, we have seen that this issue is related to a wide range of factors across the life-course1 including Life Expectancy, Childhood Obesity, Employment, Crime and Disorder and a number of ill-health conditions.

Health gaps are the differences in self-assessed health experienced between socio-economic groupings of occupations. They are measured as the percentage point difference in the rates of "Not Good" health, reported in the 2011 Census, between the most and least advantaged socio-economic occupations. Occupations are classified by the Office for Nataional Statistics against seven groups. 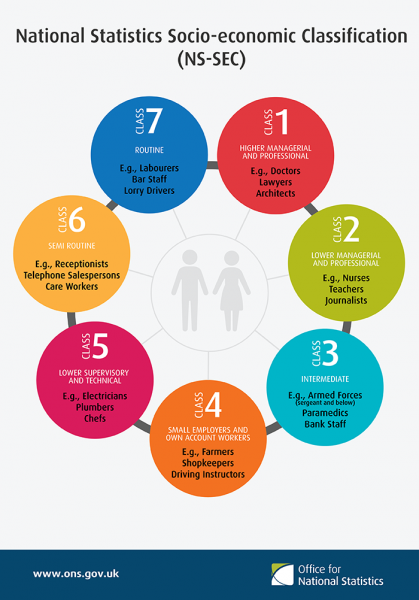 Compared to other Unitary authorities (those composed in a similar way to Bath and North East Somerset), the gap for men is ranked 10th highest (out of 55), while for women the gap is ranked 24/55. 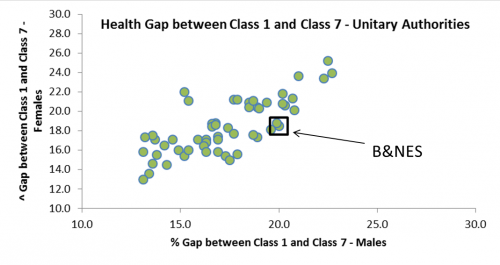 Overall, Bath and North East Somerset ranks 162 of 324 Local Authorities for social mobility, ranking highly on indicators for early years and adulthood but lower for school and youth. In the South West, B&NES ranks 13th of 36, behind North Somerset and Glouth Gloucestershire but above Bristol, Swindon and Wiltshire. 3

The Welfare Reform and Work Act 2016 reformed the Child Poverty Act 2010 and placed a statutory duty on the Secretary of State to publish and lay before Parliament a report containing data on:

National trends 5 show that, despite fluctuations, overall rates of poverty have changed relatively little since the millennium. The rate of poverty in 2017/18 was 22%, which is the same as 2016/17 and only slightly lower than the 24% seen in 2000/01.

The End Child Poverty Campaign (made up of about 150 organisations from civic society) published new figures in May 2019 on the level of child poverty in each parliamentary constituency, local authority and ward in the UK. This data is made up of local indicators from 2017/18. The methodology 7 counts households as living in poverty if their household income (adjusted to account for household size,) is less than 60% of the median. All poverty rates are calculated before and after housing costs.

According to local figures 8 Approximately 12% of children in Bath and North East Somerset were living in poverty in 2017/18, increasing to approximately 19% when housing costs have been taken into account. These figures have changed very little over the past 5 years. Compared to other local authorities in the South West, Bath and North East Somerset ranks very favourably at 29th of 36 local authorities for before-housing child poverty and 36th of 36 when housing costs are taken into account.

The Wards in B&NES with the highest and lowest percentage of children living in poverty in 2017/18 After Housing Costs (AHC) were:

The key cities network provides a means to compare Bath and North East Somerset with some of the other smaller and medium sized Cities and city regions. By comparing metrics with these cities it is possible to demonstrate an affordability challenge for the local area in the context of excellent health and [[wellbeing]] outcomes for the area 9 The Joseph Rowntree Foundation have conducted research on minimum income standards for the UK10. Between 2008 and 2013 this has increased by 25%. Based on this analysis a wage of £8.62 an hour is needed for a single person and £9.91 an hour each for a couple with dependent children.

Wage Levels and Cost of Accommodation

In 2012 average workplace earnings for Bath and North East Somerset were £385per week and residential earnings were £392 per week 12. Both are below average for Unitary Authority areas in England. The disparity in wage levels suggests a notable degree of commuting takes place in the area which can also contribute to travel cost demands. 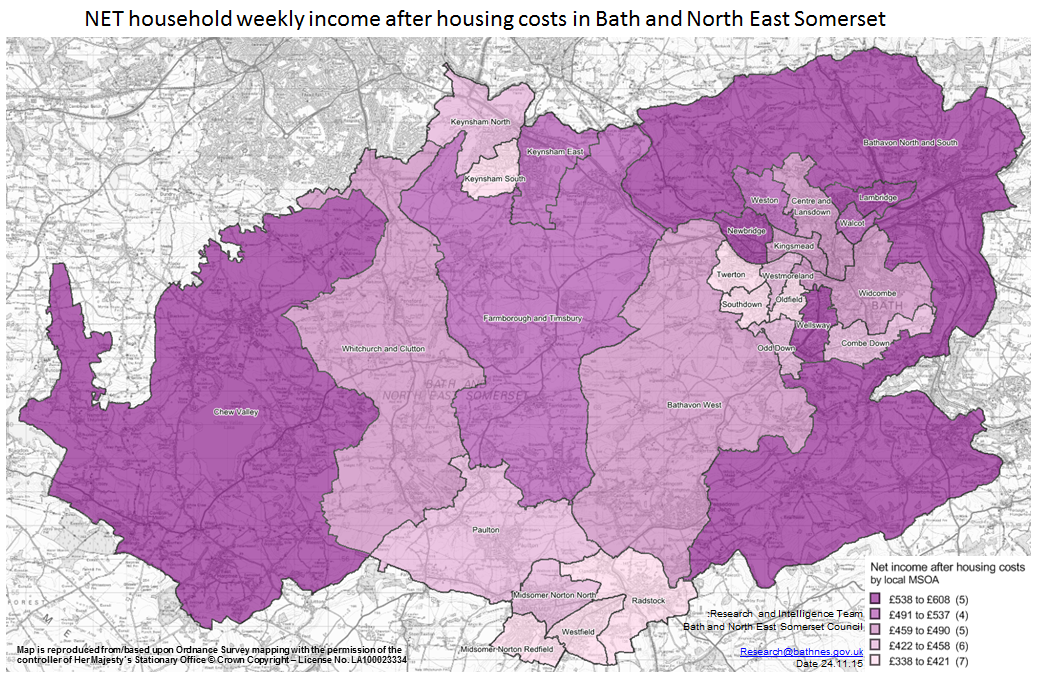 Note: This measure is the sum of the NET income of every member of a household. It calculates income after NI, council tax, pensions, rent, mortgages and other housing costs. For further details of the methodology see the ONS release notes

Most major financial lending organisations have started to publish data to a postcode sector (e.g. BA1 1) level of unsecured personal loans.14. Postcode sectors contained within Bath and North East Somerset had at Q3 (Oct-Dec) 13/14 unsecured loans to the value of over £78 million (As postcode sectors do not fit exactly to local authority areas, this number is likely to be an overestimation).

Per capita, the BA1 9 postcode sector had a balance of £2,311, making it the highest per capita rate in the country. This postcode sector is in the Bathavon North area and contains a relatively small number of properties in villages to the north west of the City of Bath.