The map below is used for flood management and shows the areas of flood risk from the main rivers and surface water in Bath and North East Somerset according to data held by the Environment Agency. 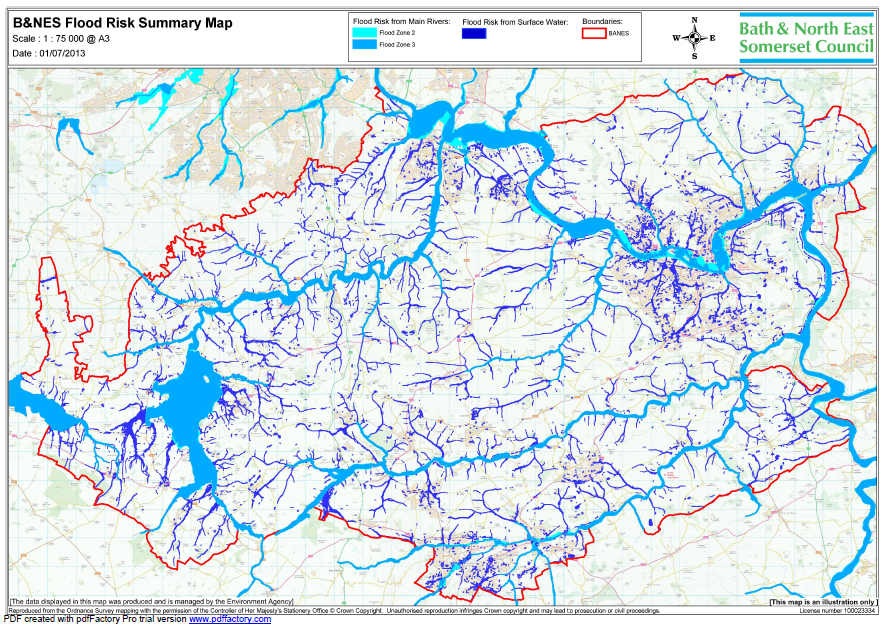 Different levels of risk as categorised by the Environment Agency:

According to the Environment Agency there are approximately 5,255 properties within Bath and North East Somerset at risk of fluvial (river) flooding, 21% at high risk, 19% at medium risk, and 60% at low risk.

The pie charts below show the number and percentage of properties within communities in Bath and North East Somerset at risk of fluvial (river) flooding (zone 3 or 2) according to the Environment Agency.  It also highlights the numbers and percentages at different levels of risk. 6 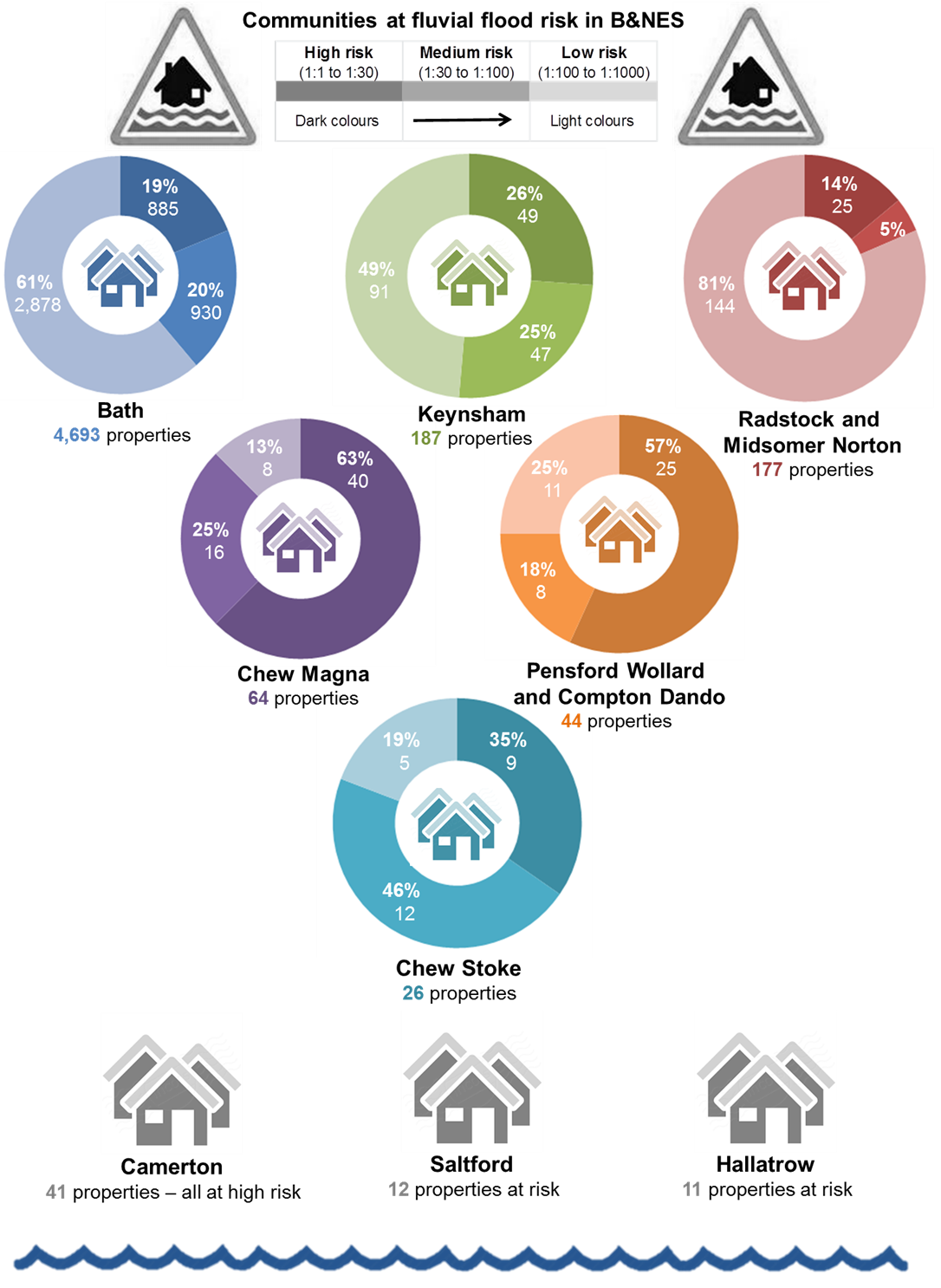 Figure 2: Number and percentage of properties within Bath and North East Somerset at different levels of risk of fluvial (river) flooding (zone 3 or 2) according to the Environment Agency.  7

Note about figure 2 - The numbers in the pie charts above were calculated by overlaying properties on top of the fluvial floodplain from a Main River or a non main river using National Flood Risk Assessment (NaFRA) data. The Environment Agency has assumed all properties are at ground level which evidently may not be the case in reality. 8

The Bath & North East Somerset regional Surface Water Management Plan was completed in July 2015 using updated data from the Environment Agency to better understand the risk of flooding from surface water. For this plan a count of the number of residential properties, critical infrastructure and emergency service assets at risk of surface flooding was undertaken.

This count and the surface water flood risk levels of these properties and infrastructure assets identified by the Environment Agency are outlined below: 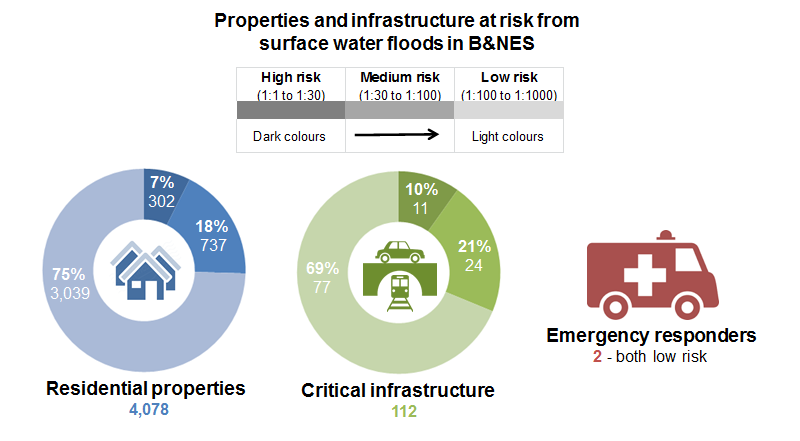 Figure 3: Properties and infrastructure at risk from surface water flooding in B&NES and the different levels of risk. 10

The B&NES Surface Water Management Plan has noted that no recent and relevant flood incidents have been directly attributed to groundwater. There is likely to be some interaction between Ordinary Watercourses, surface water runoff, and groundwater for a number of flood incidents (e.g. as has previously occurred in Chew Magna when fluvial flooding infiltrated into the ground and caused properties to suffer from groundwater flooding).

Appropriate highway drainage is required in order to ensure the highway is safe.

Flooding from other artificial sources14

Flooding from other artificial sources includes risk from reservoirs, canals and manmade structures. The flood risk along canals is generally considered to be low as they are not subject to the same flows as other water bearing infrastructure. The Canal &

River Trust do however keep records of flooding along canals within the Bath & North East Somerset area and to date there have been limited flooding incidents recorded.

There are a number of factors which will influence flooding in the future. This will result in an increase in the risk of flooding across B&NES unless this is adequately planned for and managed.
Although there are many factors that can increase flood risk, the major risks include:

Climate change is predicted to result in more severe extreme weather which could lead to extreme floods with more serious consequences. Although this will vary depending on the catchment, the UK Climate Projections 2009 Study predicted that by 2050 the South West of England will experience winter rainfall increases of around 12% (very likely to be between 2 and 26%); rainfall on the wettest day in winter will be increased by around 9%; and peak river volumes in a typical catchment are likely to increase by between 9 and 18%.

Increase risk of flooding in B&NES due to Climate Change17

Using climate change outlines in conjunction with the National Receptor Database ((Version NRD 2011) the Council has been able to establish the additional number of properties, critical infrastructure and emergency responders across the B&NES area that may be at risk from flooding when taking climate change into account.

As part of the B&NES regional Surface Water Management Plan additional surface water modelling was undertaken to assess the impact of climate change on surface water flood risk in B&NES.  The results show that climate change is likely to have a notable impact on flood risk across the B&NES. Flood outlines for an event with a 1 in 100 chance of occurring in any given year being slightly larger than present day outlines. Increases in flood extents are generally more pronounced in flatter valleys where water would spread further at lower depths. In steep-sided valleys flood extents do not increase significantly, however flooding becomes deeper.

Further analysis indicated that with allowing a 30% increase in peak rainfall intensity due to climate change, an additional 656 residential properties, 22 critical infrastructure locations and two emergency responders may be at risk of surface water flooding following an event with a 1 in 100 chance of occurring in any given year.

If new development and changes in land use are not properly controlled and managed this could cause increased runoff during rainfall events and result in increased flood risk.

If national and local guidance is adopted, flood risk should not increase as a result of new development. There will occasionally be situations where development in the floodplain is unavoidable or where, when all things are considered, the risks posed are outweighed by very significant environmental and socio-economic benefits. It is important in these circumstances to be able to demonstrate no detrimental impact on downstream impacts and that new development will remain safe through resilience and resistance measures.

As part of the B&NES regional Surface Water Management Plan a high level analysis was undertaken to look at critical infrastructure assets comprising of bridges, culverts and screens. These structures could contribute to significant flooding if they became blocked or were in a state of collapse requiring repair. This high level analysis identified 27 structures which are deemed critical for maintenance to avoid blockage.