Nationally, less active lifestyles have led to an increase in preventable diseases which are placing increasing pressures on the National Health Service and cost the NHS £8.2 Billion annually. 7

In the UK, physical inactivity directly contributes to one in six deaths 8

Public Health England state that the percentage of adults achieving recommended levels of physical activity has increased in the last fifteen years from 32% to 43% among men, and from 21% to 32% among women. In 2012, 21% of boys and 16% of girls aged 5–15 years met the national physical activity target9

Sports England funds organisations and projects that aim to help get more people playing sport and creating opportunities for people to excel at their chosen sport. 12

Through the use of the Active People Survey Sports England monitors and reports on weekly participation in the sports and other physical activities they fund.

The Active People Survey indicates that in Bath and North East Somerset there has been an increase in the proportion of adults (16 years +) undertaking 30 minutes of moderate intensity exercise on 3 or more days a week (in sports and activities funded by Sports England), from 27.0% in 2010-12 to 29.4% in 2012-14.

Ethnicity - Currently there is no local data for Ethnicity, but the England data indicates that in 2013-14 there was a slightly higher proportion of (16 years +) Black and Ethnic Minorities (18.7%) undertaking 30 minutes of moderate intensity exercise on 3 or more days a week (in sports and activities funded by Sports England), than White British (17.4%). 14

Participation by sport - The 2011-12 Acive People Survey indicated that the most popular ways to be active in B&NES were swimming, followed by cycling, and then the gym. 15

Inactivity - The Active People Survey indicates that in 2013-14, about 56.3% of adults (16 years +) in B&NES did less than 30 minutes of moderate intensity exercise a week in sports and activities funded by Sports England, this was a lower proportion than in the South West (63.9%) and England (64.2%).

Sports England have said that the health costs in B&NES due to inactivity comes to approximately £2.9 million per year.16

Variation in participation within B&NES -Sport England indicates that Twerton has the lowest adult participation in sport and active recreation (<17.6%) (MSOA 2010) 17

There is significant evidence of health inequalities as the most deprived wards in B&NES (Twerton, Whiteway and Southdown) also have the lowest levels of physical activity and high levels of obesity.

This report provides the first detailed analysis of physical inactivity, both at a national and local level. It examines the rate of inactivity in each top tier local authority and analyses its relationship with premature mortality, cost and spend, leisure facilities and green spaces. Key findings were;

In Unicef’s 2013 rates of physical activity in children in rich countries comparative overview, Unicef compares 29 of the world’s most advanced economies.

According to Unicef’s report in the UK, just over 20% of children aged 11,13 and 15 report at least one hour of moderate to vigorous physical activity daily activity, and so it has the 10th highest rate in the table. Ireland and the United States are the only countries in which more than 25% of children report exercising for at least an hour a day. Italy is the only country in which fewer than 10% of children report exercising for an hour a day.

It is important to note that one of the limitations of these league tables is that internationally comparable data on children’s lives is not sufficiently timely. Between the collection of data in a wide variety of different settings and their publication in quality-controlled, internationally comparable form, the time-lag is typically two to three years. This means that most of the statistics on child well-being used in this report, though based on the latest available data, apply to the period 2009–2010.

Children and Young People in Bath and North East Somerset

Bath and North East Somerset is significantly lower than the national average regarding the percentage of children participating in at least 3 hours per week of high quality PE and sport at school (age 5-18 years) (54%, nationally 55%, regionally 57%) 20

Research evidence clearly demonstrates that physical activity is critical in old age for the maintenance of physical function, mobility and capacity to tackle activities of daily living.

A common form of physical activity provision for older people is the community or leisure centre-based group exercise programme 29. Adherence to group based programmes can be as high as 84% 30. However, there is little evidence that such rates are achieved in long-term programmes (≥ 1 year) even though this is necessary for sustained health benefit.

Systematic reviews have shown that although interventions produce changes in physical activity at 3 or 6 months, these are often not evident at 12 or 24 months of follow-up 3132

Age, gender, level of education, physical function and frequency of getting out and about were the most important factors affecting daily activity levels. These results suggest the need for more context-related strategies to help older adults maintain physical function and remain active in their communities

A recent systematic review showed that interventions to promote lifestyle changes are more likely to be effective if they:

Short breaks for disabled children scheme carried out a consultation which concluded;

A survey carried out by the University of Bath (2011) indicates that parents have a significant effect on young people’s physical activity levels.Barriers identified included:

A street survey of 994 people across Bath, Midsomer Norton and Keynsham was carried out in November 2013. Key findings were;

The top 3 barriers to cycling less than 5 miles are:

The top 3 barriers to walking less than 2 miles are:

(3) Vehicles parked on footpath/pavement and also no barriers (7%)

4% of Voicebox 19 respondents travel to work by bicycle (34 respondents); 19% walk; 1% cycle for educational purposes including taking their children to school, 35% walk; 15% take part in recreational cycling; 12% of respondents cycle daily 40

Are we meeting the needs?

The Bath sports and leisure centre has an estimated catchment of 115,000 people, extending into Wiltshire and South Gloucestershire. It is also estimated that Bath is likely to experience greater than average demand for it's gym and swimming facilities based on it's cachment population. There are currenty 806 fitness suite stations in B&NES, a ratio of 4.4 per 1000 population, which is under-supplied compared to our statistical neighbours 43

While there is a good supply of swimming pools in Bath, a large number are only available for limited community use. The map below shows all sports facilities in B&NES, excluding private school sites. 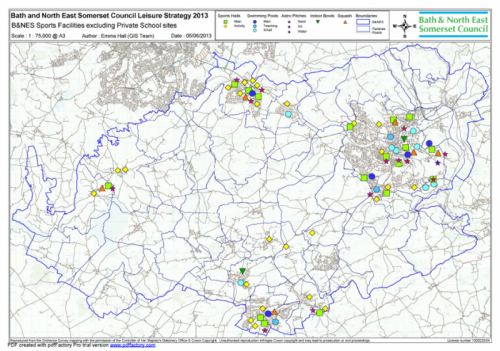