Information on groups and activities in Bath and North East Somerset open to adults who are socially isolated, affected by mental health issues, substance misuse or homelessness can be found in the Hope Guide.

What does the National data say?

As a result of their complex needs, single homeless people are costly to the NHS. They disproportionately use acute local services at a cost approximately four times more than the general UK population; inpatient costs average eight times higher than the comparison population.

The St Mungo's 'No More: Homelessness through the eyes of recent rough sleepers' report June 2013 spoke to 34 people who had slept rough recently in 2013 in order to identify opportunities to prevent homelessness from happening.

Three background factors were often present in the lives of those who had recently slept rough; A traumatic childhood, problematic drug and alcohol use and Mental Ill Health. Often interlinked, these experiences can make it very hard for people to deal with ‘trigger’ events which immediately precede rough sleeping.

Rough sleeping counts 3 and estimates are single night snapshots of the number of people sleeping rough in local authority areas. The Autumn 2016 rough sleeper estimate for Bath and North East Somerset is 25. 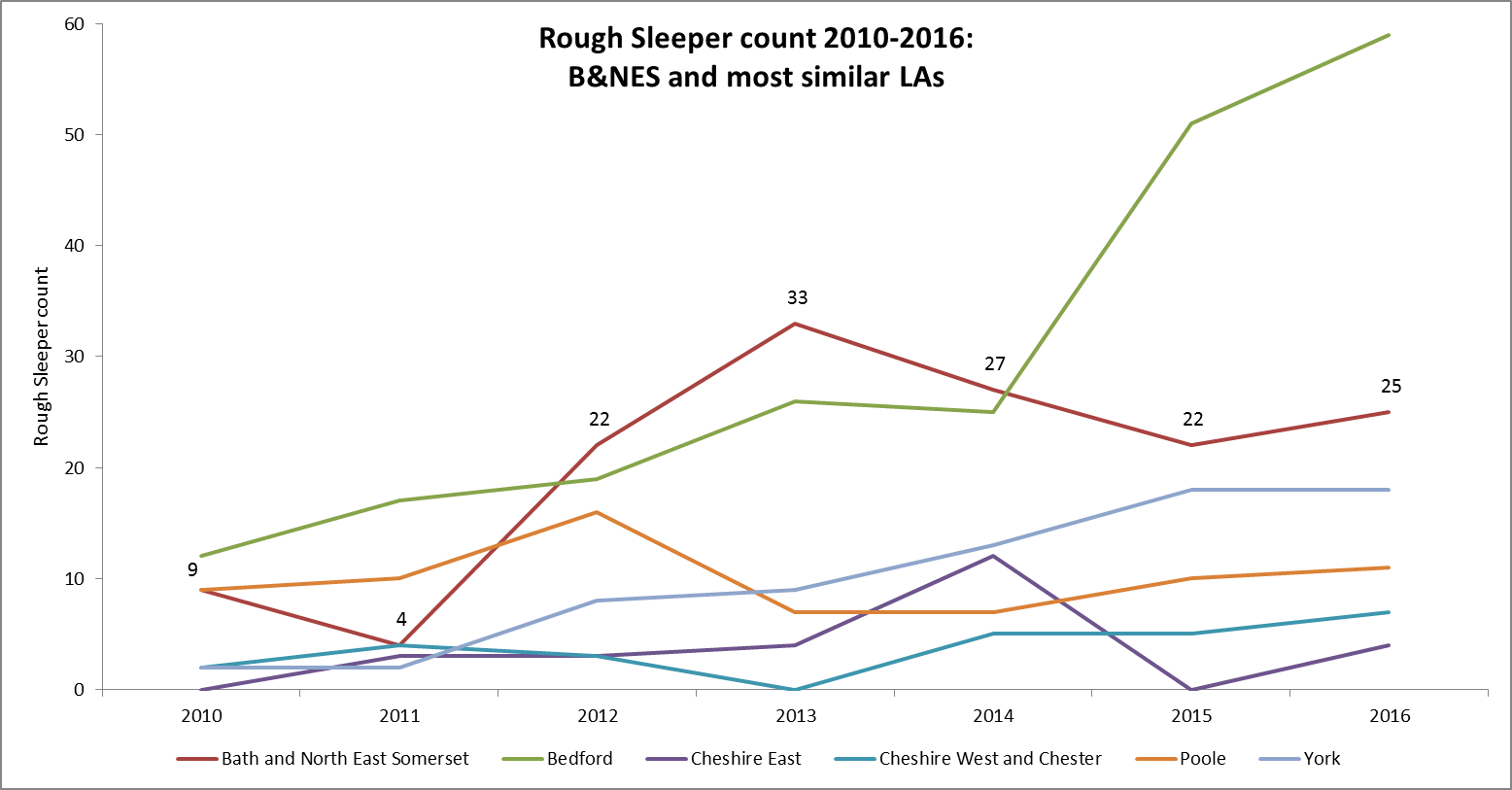 Figure 1: Rough Sleeper Count 2010 to 2016 for B&NES and it's 5 most statistically similar Local Authorities 4 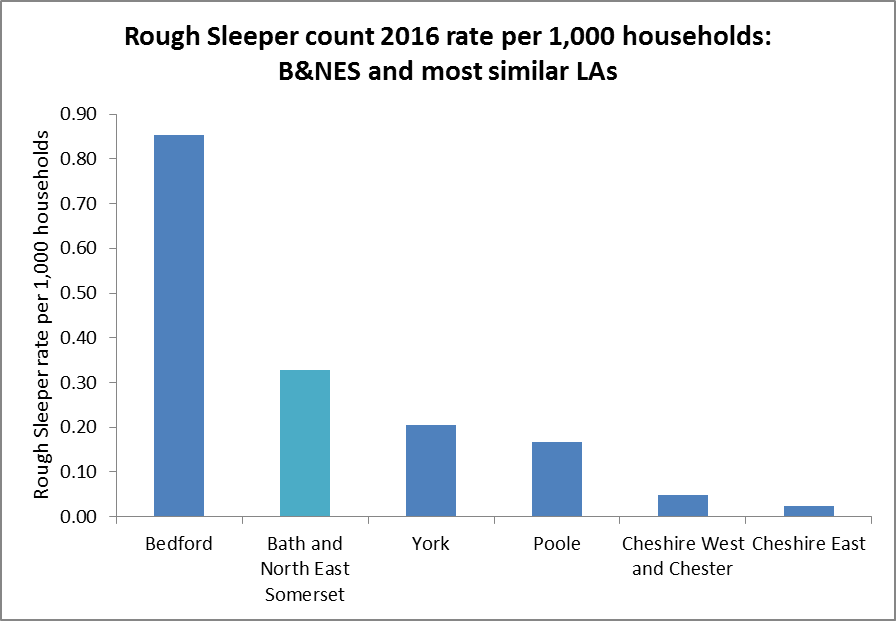 Southside Family Project work with victims of domestic abuse. Their data shows a link between domestic abuse and housing tenure and specialist needs:

There is a shift away from homelessness as more households take early advice that helps them stay in thier homes or make planed moves to alternate housing. 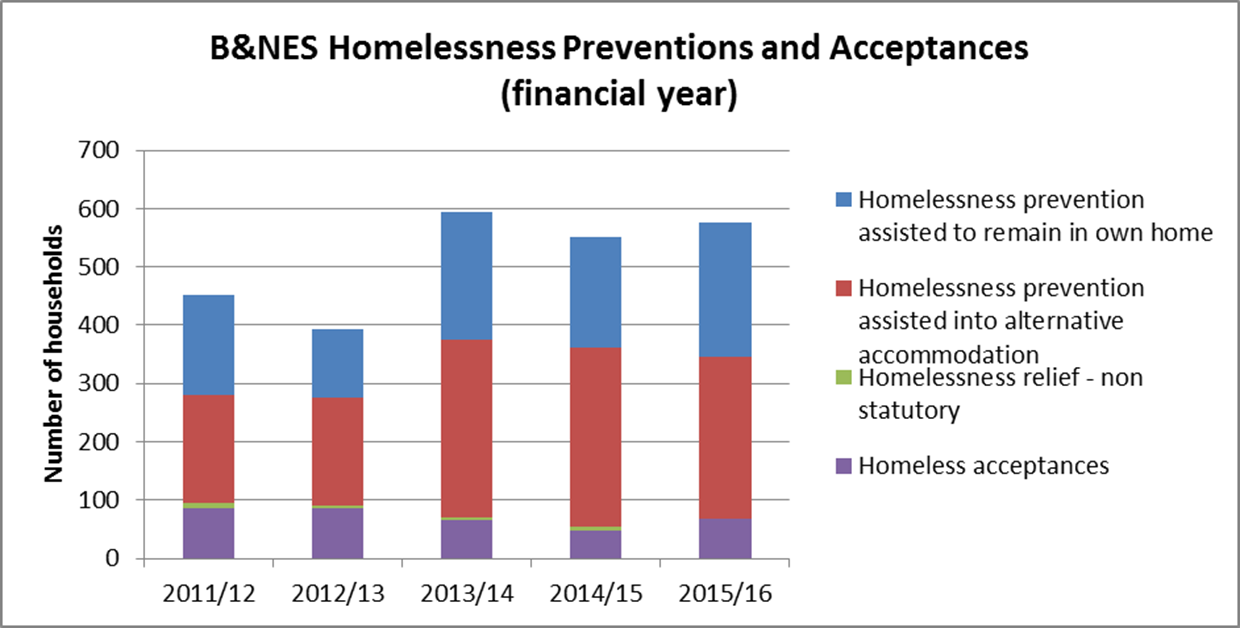 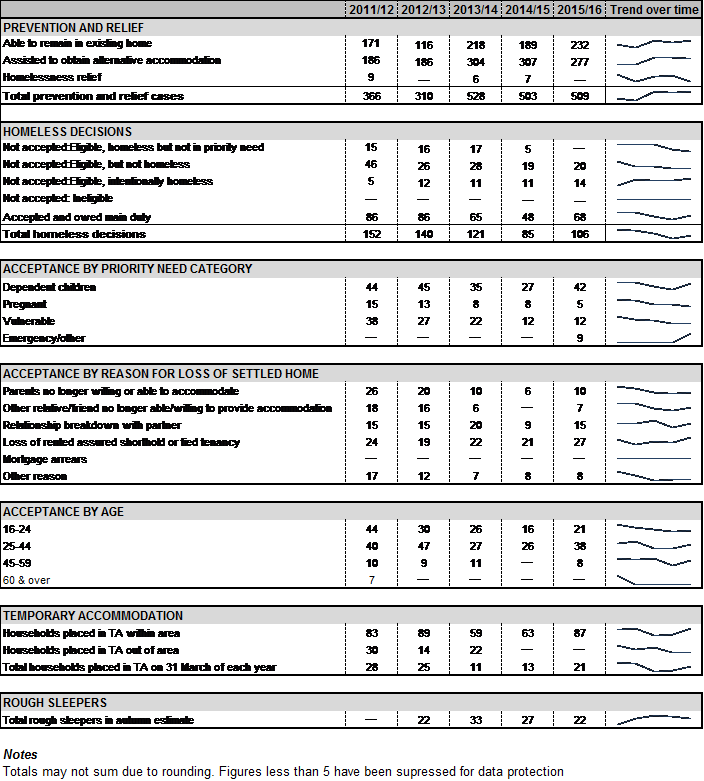 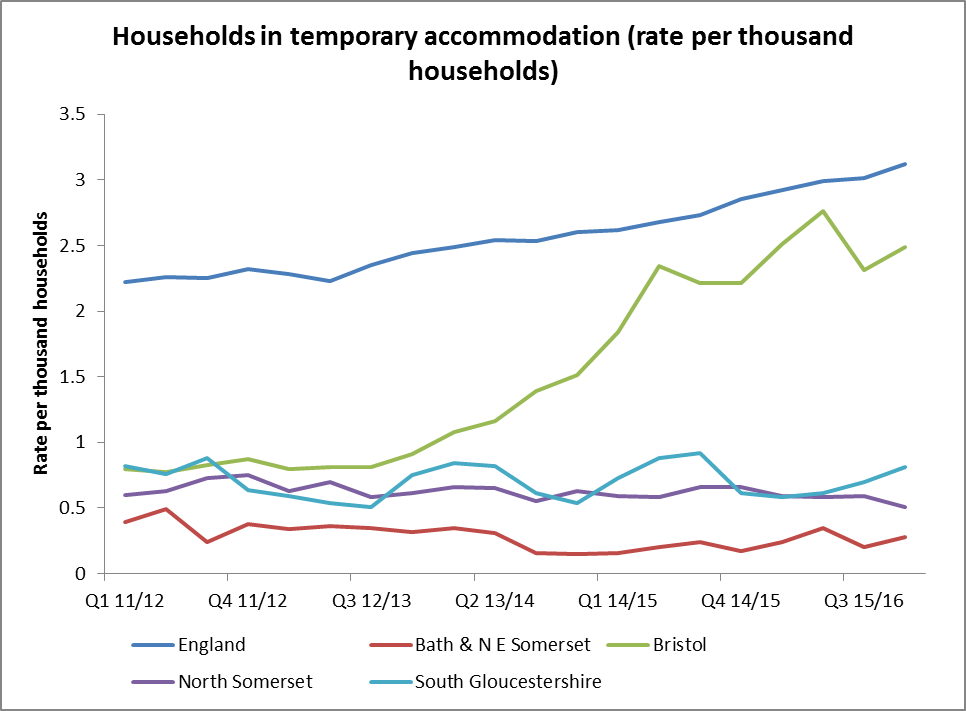 Are we meeting the needs?

There are 424 accommodation based, Council funded supported housing units (£1.4m spend in 2012/13). These units include provide for 184 older people, 73 homeless families/single homeless and 67 young people.

Access to accommodation based services is via the Gateway which provides a single point where service users can apply for a range of support services to help them live independently or prevent homelessness. The waiting list was 208 in August 2016. The largest proportions or the client group for this service are single homeless and people with mental health.

The Rough Sleeper hostel provided by Julian House offers 20 individual pods. Priority is given to female rough sleepers and for the first time, entrenched rough sleeping women are guaranteed accommodation. The pod-style rooms mean that people with dogs can be accommodated, reducing the reasons for people to refuse to come in from the streets. Feedback from partners and service users has been very positive.

17 providers are commissioned to prevent homelessness through provision of advice and information services for debt/benefits, tenancy sustainment and finding safe accommodation.

The main types of alternative accommodation secured by advice seekers are private rented using access schemes, staying with friends or relatives and social housing or hostel.

Homefinder is the Council’s Private Sector Housing Access Scheme.  It has been operational since 2008 and has helped prevent nearly 350 people from becoming homeless. It is targeted at families and homeless people with priority need.