The last decade has seen many changes in the British gambling landscape. The most notable changes during this period include growth in the availability of remote gambling (particularly via the internet), the introduction of fixed odds betting terminals into most bookmakers, an increase in the number of casinos, an increase in the prominence of poker (both online and offline), and the introduction of online betting exchanges.

The most severe form of gambling, pathological or problem gambling, is recognized as a mental health disorder. Pathological gambling is currently classified as an impulse control disorder in the DSM-IV-TR, but it shares many important features with substance use disorders, especially in terms of diagnostic criteria, clinical course, and treatment.

All major current research is at national level. Where possible, local estimates have been made using local ONS population data, applied to national prevalence rates.

·         The most popular gambling activity remains the national lottery. Excluding this the rate is 59% of adults

·         Problem gamblers are most likely to be young, male, have parents who gambled regularly and smoke.

·         Other risk factors include unemployment, poor health, those from Black Asian and Black British backgrounds and other substance misuse.

The BGPS 2010 is the third nationally representative survey of participation in gambling and the prevalence of problem gambling in Great Britain. It builds on the two previous surveys conducted in 1999 and 2007. The BGPS 2010 is the first survey to have been carried out since the implementation of the Gambling Act 2005 on 1 September 2007. The aims of the BGPS 2010 were to provide data on participation in all forms of gambling in Great Britain, the prevalence of problem gambling, attitudes to gambling and to explore a range of associations with gambling behaviour.

7,756 individuals participated in the survey from a random sample of 9,775 addresses from England, Scotland and Wales. Data was weighted to reflect age, sex and regional distribution of the British population from ONS estimates.

·        Excluding those who had only gambled on the National Lottery Draw, 56% of adults participated in some other form of gambling in the past year. This would amount to ~60,400 people in B&NES.

·        In contrast, betting on football pools, slot machines and online bets has fallen slightly over the course of the survey.

·        Overall, 14% of adults had used the internet to gamble in the past year, including online lottery tickets, betting, casino games, bingo, online slot machines and football pools. This would estimate to ~20,700 people in B&NES. Increases in online gambling activity have been greater in women than men.

·        Among respondents who had gambled in the past year, 81% reported that they gambled ‘in person’ only, 17% had gambled both online and in-person and only 2% had gambled ‘online only’.

·        The survey suggests that most gambling activities still occur ‘offline’, however casino games and betting on other sports events reported relatively high proportions of online activity – 39% and 27% respectively.

Profile of participants in gambling activity

·        Men were more likely than women to gamble overall (75% for men and 71% for women). Women however had higher incidence participating in bingo and scratchcards.

·        Gambling prevalence was highest among those who were;

o   Those whose highest qualification was GCSE’s or equivalent (76%)

o   Those in lower supervisory/technical households (79%)

o   Those with the highest personal income

·        Taking participation in all gambling activities together, past year gamblers took part in gambling, on average, on 93.6 days per year. That is, they tended to gamble more than once a week, but not quite as often as twice a week.

·        Overall, 6% of regular gamblers were classified as high-time/high-spend gamblers.

·        The profile for high-time gamblers consists disproportionally of those with poorer socio-economic indicators, with National Lottery and Bingo being the most popular activities.

·        The profile for high-spend gamblers had a higher proportion of graduates, those in paid employment and a preference for betting on horse racing, slot machines and casino games.

Problem gambling, or ludomania, is an urge to continuously gamble despite harmful negative consequences or a desire to stop. Problem gambling often is defined by whether harm is experienced by the gambler or others, rather than by the gambler's behavior. Severe problem gambling may be diagnosed as clinical pathological gambling if the gambler meets certain criteria. Pathological gambling is a common disorder that is associated with both social and family costs. The condition is classified as an impulse control disorder, with sufferers exhibiting many similarities to those who have substance addictions.

“Problem Gambling” in the context of the BGPS means gambling to a degree that compromises, disrupts or damages family, personal or recreational pursuits.

·        Problem gambling prevalence measures using DSM-IV (diagnostic and statistical manual of mental disorders) and PGSI (problem gambling severity index) estimate problem gambling at between 0.7 and 0.9% of the adult population in 2010. This would equate roughly to between 10,300 and 13,300 problem gamblers in B&NES. (This estimate should be considered in the context of the confidence intervals of the measures – between 0.5 and 1.2%, and the inherent issues with applying national estimates at a local level).

·        Rates observed in Great Britain compared similarly to other European countries, particularly Germany, Norway and Switzerland, and lower than countries like the USA, Australia and South Africa.

·        Problem gamblers were more likely to be male, younger, have parents who gambled regularly and had experienced problems with their gambling behaviour and be current cigarette smokers. Unemployment, poor health, alcohol consumption and those from Asian/Asian British and Black/Black British backgrounds were also associated risk factors.

There are an estimated 127,500 people aged under 24 with a gambling problem in the UK. Factors linked with problem gambling in young people include; depression, anxiety, crime, suicide, alcohol and substance abuse and poor school performance.

Ipsos MORI conduct underage gambling surveys for the National Lottery Commission 3. 4 The research aims to gauge current levels of underage play, and to investigate how and where underage players buy national lottery tickets. The survey covers 16yr olds as well as younger children. The findings are based on representative samples from schools in England and Wales.

The first known UK research to focus exclusively on the relationship between problem gambling and overindebtedness, published in Autumn 2009, was jointly commissioned by GamCare and the Money Advice Trust from Manchester Metropolitan University. Key findings were;

·        Understanding of problem gambling amongst money advice agencies and in the NHS is extremely low.

·        Awareness of the help available to problem gamblers amongst these agencies and in the NHS, particularly GPs, is equally poor.

·        There is an urgent need to improve education about gambling for young people, alongside or as part of work on financial literacy and understanding chance and risk.

The large scale Voicebox Resident Survey aims to provide an insight into Bath and North East Somerset and its local communities and to capture resident’s views on their local area and council services. The questionnaires are posted to 3,150 addresses selected randomly in the local authority area. Selected respondents also have the opportunity to complete the survey online.  Responses were weighted by age and gender.

In the 2014 survey, 2 questions about gambling behaviour were included  - 1)Do you gamble? And 2) How often do you gamble? The second question asked respondents to indicate their gamblineg frequency by type of gambling (i.e spread betting, football pools, poker, casino games etc.) 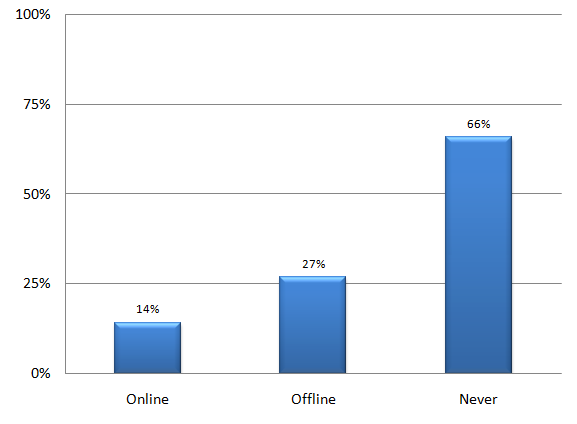 Figure 1: responses to the question ‘do you gamble?’ – 896 responses were received to this question

Q2: How often do you gamble?

Respondents who indicated that they do gamble either online or offline were then asked to indicated how often they gamble, against a range of gambling activities 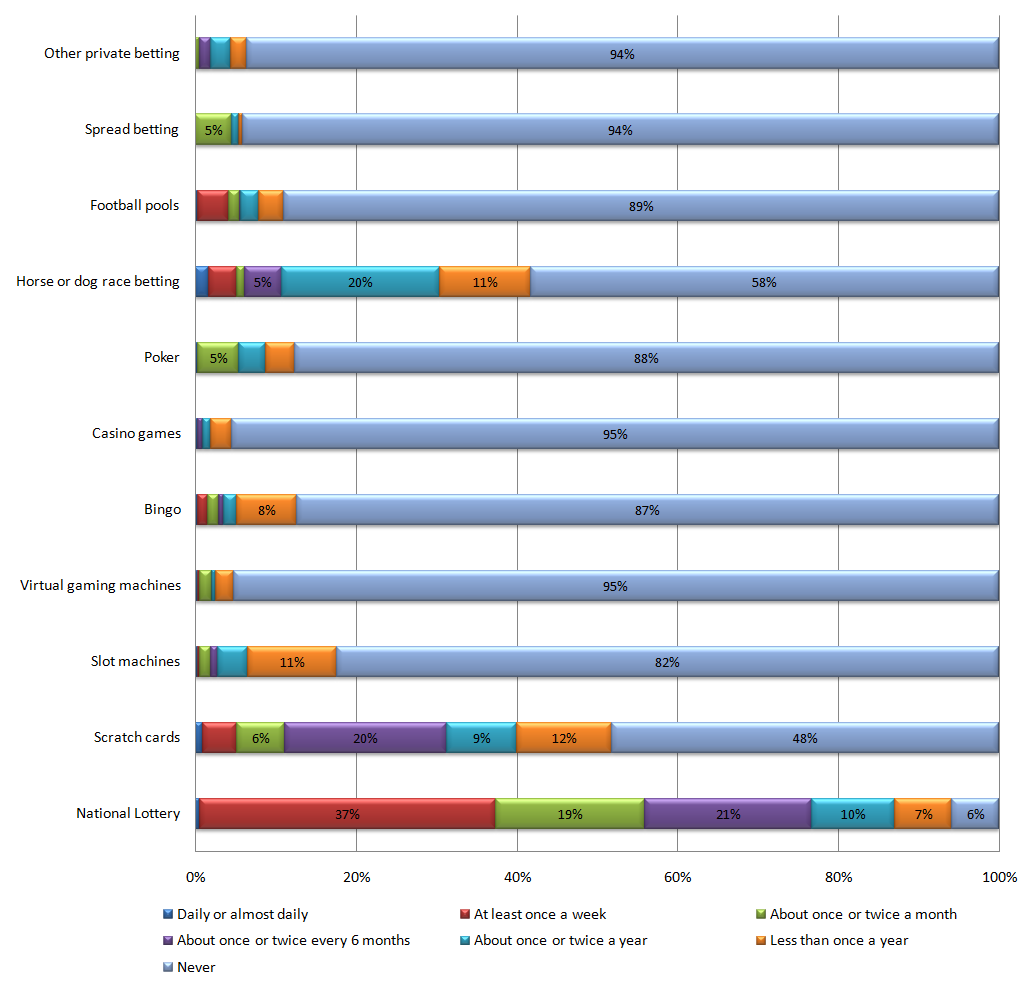 Figure 2: Self-reported gambling frequency by activity for those respondents who indicated that they gamble either online or offline.