The key elements in determining whether a household is fuel poor or not are:

There are two main definitions of fuel poverty.

Under the 10 per cent definition, a household is said to be fuel poor if it needs to spend more than 10 per cent of its income on fuel to maintain an adequate level of warmth.

The Fuel Poverty Ratio is defined as:

If this ratio is greater than 0.1 then the household is Fuel Poor.

Under the Low Income High Cost definition a household is considered to be fuel poor where:

The depth of fuel poverty amongst these households is measured in terms of a fuel poverty gap, which represents the difference between the modelled fuel bill for each household, and the reasonable cost threshold for the household. This is summed for all households that have both low income and high costs to give an aggregate fuel poverty gap.

It is estimated that in 2012 there were were 3.1 million households, 14.7%, in England that were in fuel poverty according to the 10% definition. 4 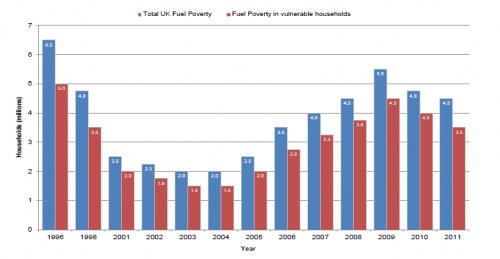 (Click here to see a larger image of Figure 1)

(Click here to see a larger image of Figure 2)

Under the low income high cost measure, 2.6 million households were fuel poor in England in 2011 (approximately 11.7 per cent of English households), a decrease of 0.1 million from 2010. 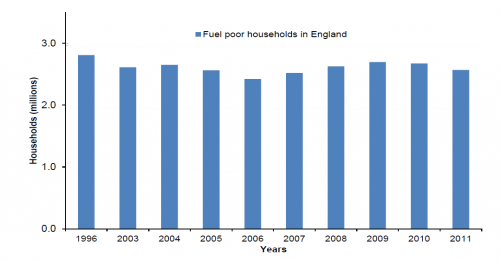 Figure 3: Fuel poverty in England in millions, between 1996 and 2011 (according to low income high cost definition)7

(Click here to see a larger image of Figure 3)

The 10% indicator shows a larger drop in the number of fuel poor households, than the low income high costs measure. This is mainly because the 10 per cent measure is absolute, whereas the LIHC is relative.

The decrease in fuel poverty in England between 2010 and 2011 was the result of a rise in income, and a reduction in energy use, through improvements in the energy efficiency of housing. These two things combined to offset the price increases seen in 2011.

The aggregate fuel poverty gap however, increased in real terms from 2010 by £22 million to £1.15 billion, and the average gap increased by £26 to £448, largely reflecting the increase in energy prices.

People vulnerable to the impacts of fuel poverty 8

In England, around 73 per cent of households were classified as vulnerable in 2011. A vulnerable household is one that contains the elderly, children or someone who is disabled or has a long term illness.

In 2011, average incomes (before housing costs) rose from the previous year, with the median income rising by 0.7 per cent, from £23,240 to £23,420. However, unlike the change between 2009 and 2010, incomes did not rise equally across all households. The poorest 40 per cent of households saw the largest rises in incomes between 2010 and 2011, of between three and four per cent. Higher income groups saw more modest increases, and even decreases.

Given the increases seen in the lower income groups, we would expect to see a reduction in fuel poverty according to the 10  per cent definition between 2010 and 2011, as these groups typically make up the vast majority of fuel poor households. This decrease in fuel poverty was observed.

Under the low income high costs measure, housing costs are subtracted from the income of each household. Inevitably, this will make those that own their own home (and so have no housing costs) better off relative to those with rent and have mortgage payments. Between 2010 and 2011, the median after housing costs (AHC) income increased slightly, from £19,130 to £19,210. Whilst incomes remained similar or increased slightly across most income groups, they fell sharply for those in the bottom income decile. This is in sharp contrast to the changes seen in before housing costs (BHC) income.

Under the 10 per cent definition, prices have typically been the most influential factor in movements in fuel poverty. Between 2004 and 2009, prices rose at a greater rate than incomes, thus leading to an increase in fuel poverty. 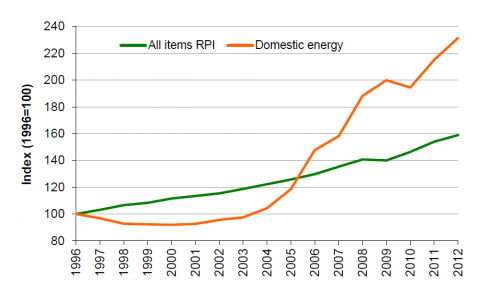 Figure 4 shows retail prices of domestic energy since 1996, and compares these against the prices of the "typical" basket of goods and services that make up the Retail Prices Index. As this graph shows, 2010 marked the first calendar year in over a decade that domestic energy prices decreased from the previous year. This was despite a rise in general inflation over this period. However, prices rose sharply again between 2010 and 2011.

The average energy efficiency of households,as indicated by the Standard Assessment Procedure (SAP09), increased in 2011, rising to 56.8 from 55.2 in 2010. Although the measurement of SAP has now changed (from SAP05 to SAP09), making it hard to directly compare this with previous years, this appears to continue a trend of steady SAP improvements in recent years. 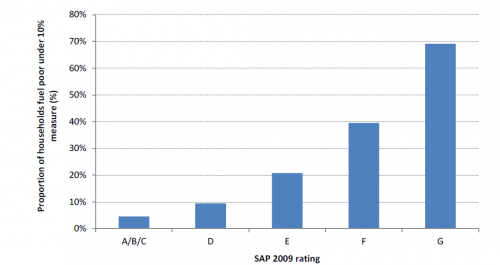 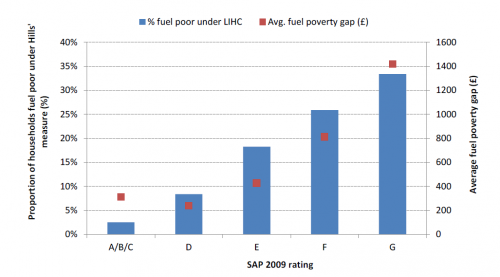 The winter months falling in 2011 (i.e. the end of the 2010/11 winter and the start of the 2011/12 one) were mild relative to previous years. This resulted in a much lower number of days requiring heating, and thus also contributed to lower energy consumption.

after housing costs) and fuel costs, are equivalised to be representative of the number, and composition of the occupants of the households

In 2011, half of all fuel poor households under the 10 per cent measure came from single person households, and a further one in five were couples over 60.

Over a quarter of all lone parent households are in fuel poverty under the low income high costs measure in 2011, compared to 15 per cent of couples with dependent children.

Fuel poverty rates differ notably across the country under both measures. 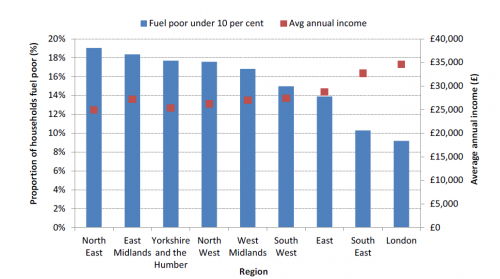 Figure 7: Fuel poverty under the 10 per cent measure and average annual income by English regions, 201117 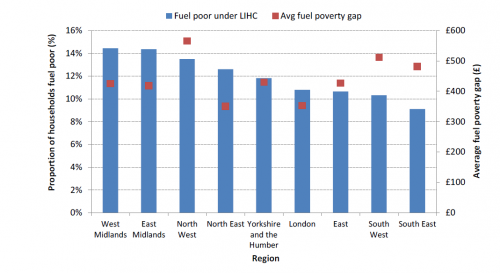 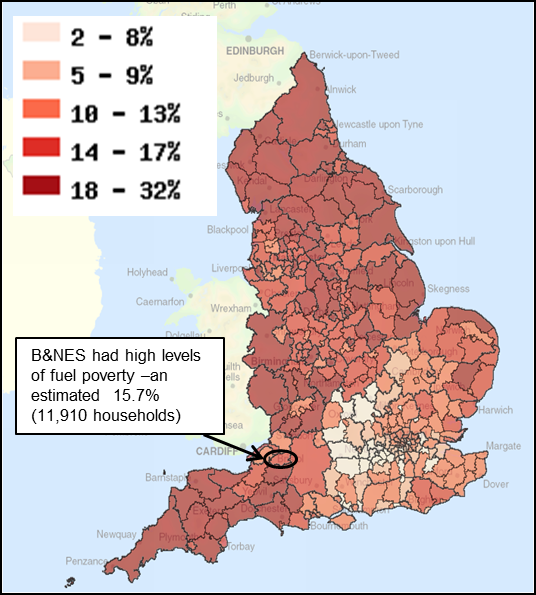 There was however a great deal of variation in the extent of fuel poverty in 2012 according to the 10% definition within Bath and North East Somerset, with the proportion of households in fuel poverty in different Lower Super Output Areas (LSOAs) ranging between 30.5% - 5.6%. 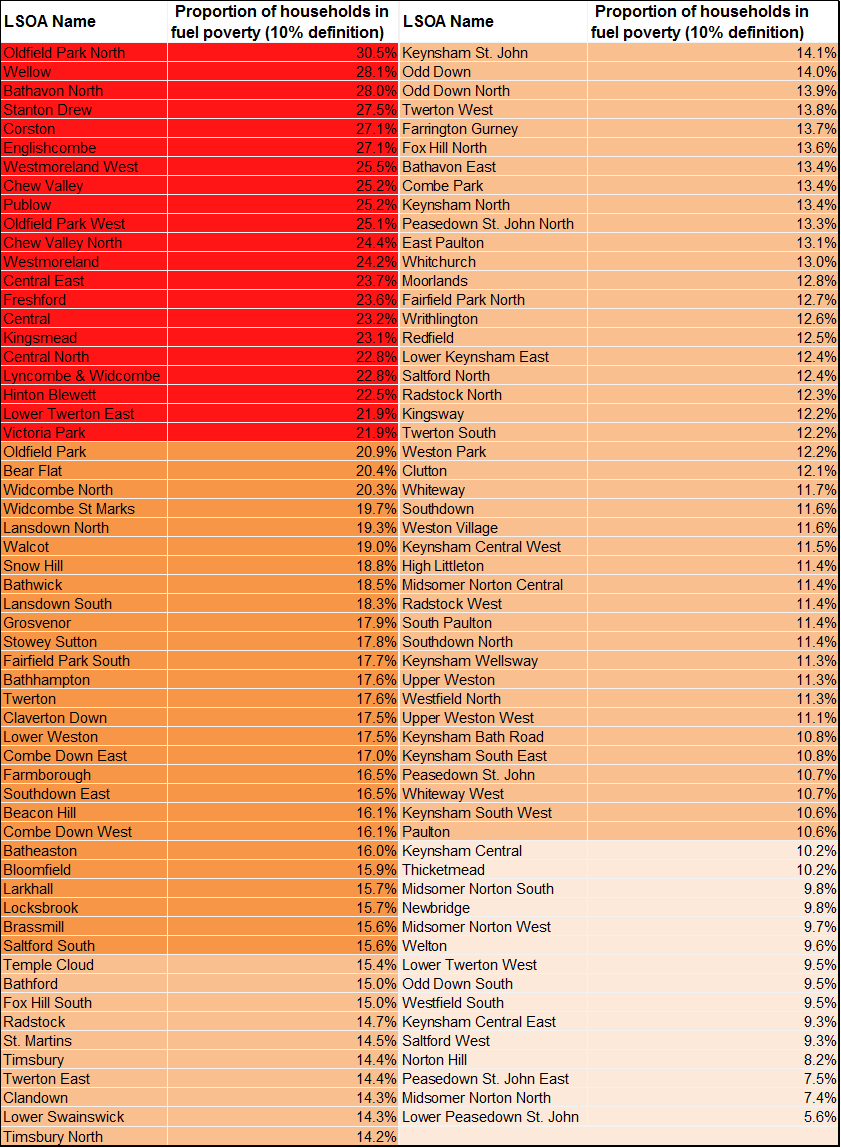 According to the low income high costs measure of fuel poverty there were 7,459 households in fuel poverty in Bath and North East Somerset in 2011, 10.2% of all households in the area. This proportion is similar to that for the South West.  28

Again, there is however a great deal of variation in the extent of fuel poverty according to the low income high costs measure within Bath and North East Somerset, with the proportion of households in fuel poverty in different LSOAs ranging between 26% - 3%. 29

The House Conditions Survey  asked a range of questions relating to fuel poverty and estimated that 11,350 (17.3%) of occupied, private sector, dwellings in fuel poverty in B&NES compared to ~21% based on the findings of the Department of Energy and Climate Change’s 2011 report 31

As part of the survey residents were asked to specify by what means they pay for gas and electricity. Different payment methods usually incur different tariffs, which can compound the issues of affordability and fuel poverty.

The large scale Voicebox Resident Survey aims to provide an insight into Bath and North East Somerset and its local communities and to capture resident’s views on their local area and council services. The questionnaires are posted to 3,150 addresses selected randomly in the local authority area. Selected respondents also have the opportunity to complete the survey online.

The large scale Voicebox Resident Survey carried out in 2010, 2012 and 2013 asked a number of questions relating to fuel poverty and help with keeping homes warm. 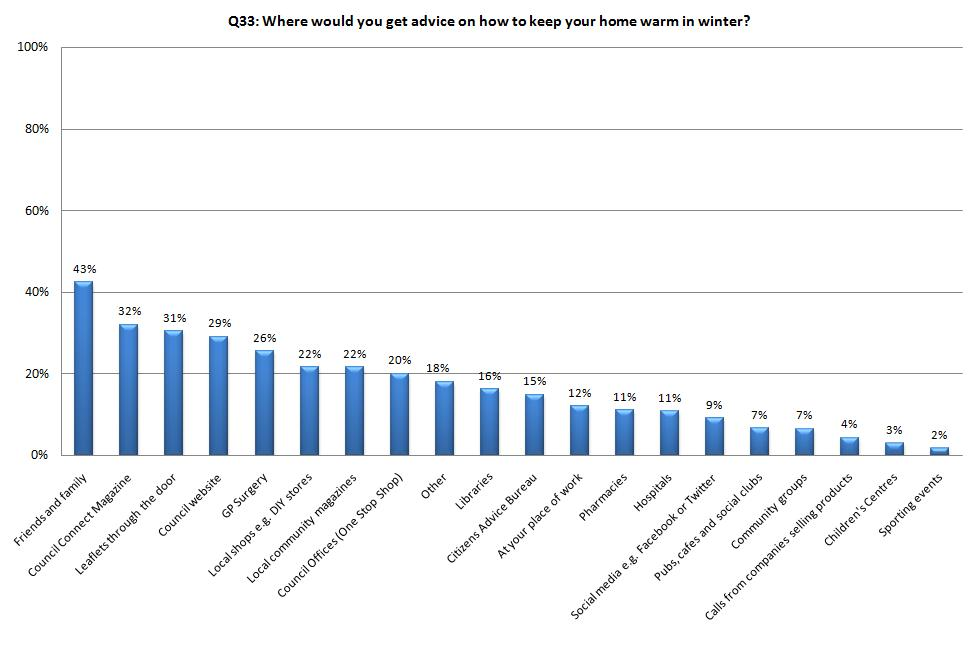 Figure 11: Where 2013 Voicebox respondents would get advice on how to keep their homes warm

What can we practically do?

More information can be found on the Climate Just Web Tool.