Latest News -  Schmallenberg vaccine ready for use this summer

Information for farmers and vets in Great Britain

Between August and October 2011, outbreaks of disease in adult cattle that included mild to moderate fever, reduced milk yield, loss of appetite, loss of body condition and diarrhoea were reported in both the Netherlands and Germany. Testing for common causes proved negative. From November 2011, abortion and stillbirths associated with foetal abnormalities, affecting mainly sheep but also cattle and goats, were identified in the Netherlands, Germany and Belgium.
A new virus was identified in December 2011 as the cause of both conditions. This was named ‘Schmallenberg virus’ after the German town where the virus was first identified.

In early 2012, the first cases were suspected in the south and east of England. In these initial cases, the disease was diagnosed following the testing of deformed lambs.

Schmallenberg virus is in the Simbu serogroup of the Orthobunyavirus group. This group of viruses includes many different viruses which occur in Asia, Africa and Australia, but have not previously been identified in Europe.

As this is a newly identified virus there are still aspects of the disease that remain unknown at this point until more research has been done.

The disease is widely distributed in the west of Germany, throughout the Netherlands, and in parts of Belgium and northern France and has been detected in England.

Currently we know the virus will infect and cause disease in sheep, cattle and goats.

Orthobunyaviruses are typically primarily spread by biting insect vectors, such as midges and mosquitoes, although the routes of Schmallenberg virus transmission have not yet been confirmed. The potential for direct transmission (i.e. direct from one animal to another) is therefore, as yet, unknown.

If biting insect vectors are the major route of transmission, significant spread is believed unlikely during the winter period when biting insects are usually inactive.

Research work suggests that live infected animals have virus in their blood stream for two to six days, when biting insects may acquire the virus which they can then transmit to another susceptible animal during blood-feeding.

It is believed Schmallenberg virus was circulating widely in sheep and cattle in the Netherlands and in a part of western Germany between August and October 2011.

The initial introduction of the virus to the UK therefore may have resulted from either wind-blown insect vectors or via imported infected livestock during this period.

Ruminants in the south and east of England, and imported ruminants and their offspring, are currently at the highest risk of showing signs of the disease, which at this time would be manifest particularly as birth of offspring with deformities or neurological signs.

As the virus can localise in the tissues of foetuses, it is uncertain as to whether there is potential for live actively infectious lambs, calves and goat kids in the spring, which could continue the spread of the infection next year.

Two clinical presentations have been observed due to Schmallenberg virus infection.

In adult cows the acute infection resulted in diarrhoea, fever, a reduction in milk yield, with a full and rapid recovery over several days.  Affected herds had outbreaks of disease lasting two to three weeks.

In other species this stage of the disease has not been noted. Clinical signs have not been reported in adult or growing sheep.

The second presentation of the disease is associated with abnormalities in animals born alive or dead at term or aborted following infection of the dam, affecting mainly sheep but also cattle and goats. Malformations observed to date include bent limbs and fixed joints (arthrogryposis) and brain deformities (spaces filled with fluid in cerebral hemispheres, abnormally small parts such as cerebellum and brainstem) and marked damage to the spinal cord. Some animals are born with a normal outer appearance but have nervous signs such as a ‘dummy’ presentation or blindness, ataxia, recumbency, an inability to suck and sometimes fits. The foetal deformities vary depending on when infection occurred during pregnancy.

According to an initial risk assessment carried out by public health authorities in the Netherlands and a follow-up risk assessment by the European Centre for Disease Prevention and Control, there is unlikely to be a risk to human health from Schmallenberg virus; but this is not yet certain.

Farmers and veterinary surgeons are advised to take sensible hygiene precautions when working with livestock and abortion material. Although several members of the group of related viruses can affect humans, the ability to do so is thought to be due to a gene sequence which is not present in Schmallenberg virus.

Pregnant women should not have contact with sheep and goats at lambing/kidding time due to risks of exposure to other disease causing organisms.

Whilst this is not a notifiable disease, please contact your veterinary surgeon if you encounter cases of ruminant neonates or foetuses which are stillborn, show malformations or are showing nervous disease and you suspect Schmallenberg virus infection. Veterinary surgeons should then contact their AHVLA/ SAC laboratory if they suspect infection with the virus. Details of premises with suspected or confirmed disease are treated as confidential and will not be made publicly known.

Suspect cases will be sampled for histopathological and virological examinations. Confirmation of infection is by detection of virus sequences using real time PCR on tissues. There is currently no serological (blood) test available but work is in progress to develop one.

If cases occur outside laboratory working hours, please keep carcasses chilled until they can be submitted for testing.

There is no treatment or vaccine currently available for this disease. As this is a new disease further work is needed to determine what control measures may be appropriate.

Malformations affecting lambs exposed to the virus in pregnancy may lead to lambing difficulties. Excessive force must not be used during lambing as this may risk injury to both the ewe and lamb. Farmers should contact their veterinary surgeon in these cases which cannot be delivered naturally.

Embryotomy (dissection and removal of a foetus that cannot be delivered naturally) should only be carried out on dead foetuses. It should never be used to remove a live animal. 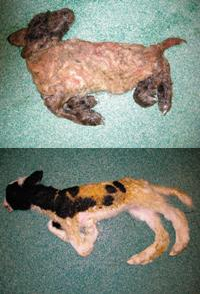