Up to 11% of Bath & North East Somerset's carbon emissions are generated by its street lights. The existing street lights across the region are also in a variable condition, with a large number of aging lights requiring replacement. The Council is currently underway with a project to renew large sections of the lighting network with new, energy efficient LED (Light Emitting Diode) lights. These units reduce energy consumption by up to 60%, while providing the same level of light as before. LED technology also enables us to introduce variable dimming technology, reducing light levels throughout the night when the roads are less busy. Over 8,500 street lights on residential roads have been targeted for replacement by the end of summer 2017. This substantial programme will significantly reduce running costs and carbon emissions, while resulting in a more reliable and controllable system of lighting. 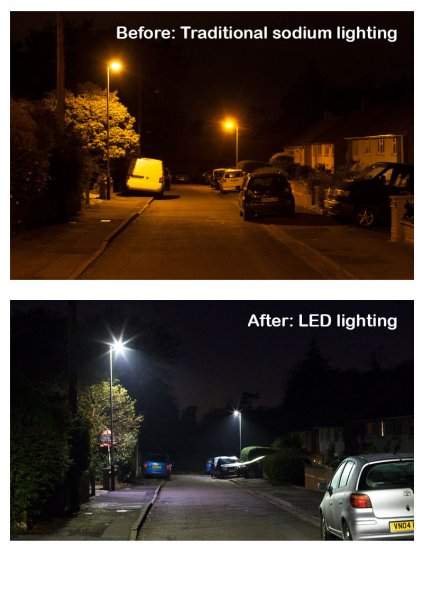 What people have told us

Feedback on the new lighting delivered in Bath has been very positive. Below are a few of the comments we have received to date:

LED stands for Light Emitting Diodes - a modern lighting technology that uses a large number of tiny, highly energy efficient, light emitting units (diodes) grouped together to provide a light source. LED is a low energy light source which has been used safely and successfully in public lighting projects for several years.
The photographs show the difference between the sodium lights currently used in most locations across Bath and LED lights. The whiter light produced by LEDs shows colour and detail far better.

Light pollution from large cities is also a major concern. The more directional light from LEDs cuts ‘spillage’ onto surrounding areas and upwards into the sky, greatly improving visibility of the night stars.

Where we will be working and when

The replacement programme is being delivered by our contractor SSE; installation of the replacement lanterns started in Bath in mid-June and will be completed shortly. From December 2016, we will be working to upgrade the lighting in towns and villages outside of Bath as below. Residents within the streets where we are working will receive notification approximately two weeks in advance.