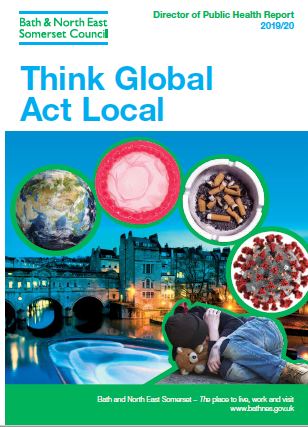 The theme of this year’s report is Think Global Act Local, which focus on how people’s health is affected by the most international and the most individual factors. These span from the planetary and existential threat of climate change, to our most personal and intimate experiences such as our sexual behaviour. I also look at two subjects that remain incredibly important but are often overlooked or underestimated; namely vaccination that is one of the greatest life-saving inventions in human history, and tobacco that is still one of our greatest curses. Then finally I focus on the inequalities that exist in Bath and North East Somerset as everywhere in the UK and the world, and show how far we still have to go to afford basic human benefits and dignities to all.

This report was written before the Covid pandemic that you may be aware of! On the one hand this makes my report look a bit strange: a bit “BC”. But on the other hand, how well it illustrates the local and the global. From, probably a single virus mutating in an unknown bat, via a market in a city that most of us had never heard of, this menace has marched across the globe in a few short months to reach every country, city, town and village on earth. It has impacted severely on the lives of literally every human on the planet, either through illness or the extreme measures that have had to be put in place to avoid it. Indeed by stopping us flying and stopping us mixing, it has impacted on both climate change and sexual behaviour at the same time!

So read this as either a historic document, from a time long ago in a galaxy far away - or think about how we all live on a very small planet under the same sun in the same sky, and are affected by the same environmental, biological and social influences, however we might try to protect ourselves on our island and in our bubbles.  But however you read this, please think also about how some people weather the storms and stresses of life in luxury yachts while others have barely a plank of wood to hold onto in dangerous seas. If that truth wasn’t obvious enough last year, it certainly is now.