Please enjoy the new park and river setting but be safe and take care and remember the park is designed to flood. Watch our short river safety film below to learn about the access restrictions when the river levels are high.

Bath & North East Somerset Council and the Environment Agency are working together to deliver a very important infrastructure project to deliver flood defences for parts of the city centre that will also begin to build a positive relationship between Bath’s city centre and the River Avon.

The Bath Quays Waterside Project will put in place essential flood mitigation and flood defence works to the north and south banks of the river between Churchill Bridge and Midland Bridge that address the negative impacts of climate change. In summary, these interventions will:

While the Bath Quays Waterside Project was conceived as a flood mitigation and defence project, it is also a major opportunity to overcome the city’s history of turning its back on the river. The project seeks to significantly enhance the riverside, creating better access and a more beautiful and enjoyable environment for local people and visitors to the city. These improvements will then be complemented and completed by the forthcoming development of ‘Bath Quays’.

Click on the map below to view a bigger version. 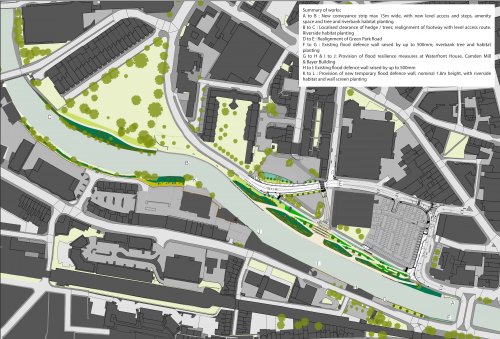 In summary, the plan will:

The Council and Environment Agency are funding these works (£6.22 million) with a combination of Revolving Infrastructure funding made available by the West of England Local Enterprise Partnership, and Local Levy and Flood Defence Grant in Aid funding.

The project was granted planning consent in February 2015. To view the planning application, go to: www.bathnes.gov.uk/BathQuaysWatersidePlans

The first site activity took place in early 2015 with the removal of trees and other vegetation. The first phase of construction work commenced early 2016, starting with the diversion of Green Park Road, to be then followed by the work to widen and landscape the north river bank later in the year. Work to provide the majority of the flood defence boundary along the south river banks commenced in Spring 2016.

The next phase of flood defence work will begin 19 February to remove trees and vegetation on the south side of the river adjacent to the Bath Quays South site (Newark Works), in preparation for completing the flood defence wall and lowering the river bank along this section. New trees and planting will ultimately be introduced, completing our programme to introduce more than 150 new trees to the river corridor at Bath Quays.

The widened river bank is designed to accommodate the flow of flood waters. For safety reasons, access to the bank will be restricted during flood events. It is anticipated that this could occur several times a year.

Although the initial phase of works on the north bank has been completed, sections of the park will close again, for periods over the next few years, to enable regeneration work to continue

The flood defence works along the south edge of the river are envisaged to be completed in 2018 as part of the Bath Quays South development scheme.

On Monday, May 16 traffic was permanently diverted from Green Park Road onto the new two-way system around Avon Street Car park which will then allow the widening of the adjacent river bank improving the River Avon's ability to convey flood water, and establish a new riverside public open space. Under the new traffic system, Ambury remains one-way but with the existing buses-only restriction removed, and a new exit onto Ambury from the Avon Street car park has been created, to replace the current exit onto Green Park Road. The entrance to the car park is unchanged and remains on Corn Street.  Although Green Park Road will be closed to motorised traffic, a route along will be retained for pedestrians and cyclists for use once the scheme is completed.

Riverside Coach Park and cafe and Avon St car park will remain open throughout the works, although the coach park will operate as a short term parking facility only, with long term coach parking available at the First Bus depot at Weston Island. For information on coach parking, go to: www.bathnes.gov.uk/services/parking-and-travel/coach-parking

Improvement works to the pedestrian/cycle path between Nelson Villas and Green Park, as part of the Bath Quays Waterside project works, are now complete.

For detailed information about the construction works and its impact on the public, please refer to the question and answer sheet provided in the Documents section on this page and visit the Contractor's community web page at: http://community.alungriffiths.co.uk/works-in-your-area/bath-quays-waterside/.