Bath Quays Bridge will provide a new crossing point over the River Avon for pedestrians and cyclists; an alternative crossing point to Midland Bridge and Churchill Bridge to the west and east respectively. The bridge will connect the development sites of Bath Quays North and South and enhance the improved connectivity between the riverside and Bath city centre.

Choosing a new bridge for Bath

The bridge design was selected via an international design competition, commissioned by B&NES Council in 2015. 49 design teams were reduced to a shortlist of six by a panel of Council representatives and respected experts in the fields of bridge engineering and architecture.

The six short-listed designs were evaluated by the panel and exhibited at the Council's One Stop Shop and online with visitors invited to vote for their favourite. Following the exhibition, the panel evaluated the designs and selected Paris based engineering and architectural consultancy Marc Mimram's 'Between History and Modernity' as the winning design. The winning design was also the public's favourite.

BAM Construction started on the substructures for the bridge starting October 2019. This will include a new river wall on the south side of the river and two foundations on the north side of the river. The works on the north side of the river will affect access with towpath and footway/cycleway diversions in effect from 23 March 2020. Alternative routes will be signposted with pedestrians and cyclists to divert via Avon Street, Green Park Road and Green Park cycle path. Some river moorings will be closed also. The closures will be intermittent until completion of the installation of the bridge in 2020.

Victor Buyck Construction are progressing well on the fabrication activities for the superstructure. The bridge install is envisaged to commence in summer 2020.

In tandem with the international design competition local children were invited to submit their own bridge design in the form of a 'top trump' style information card. Entries were judged on the basis of their creativity and imagination and all the entries were made up into two sets of Top Trump game cards.

Winners of the Under 8 age group.

Sydney Dix for 'The Sydney Bridge' 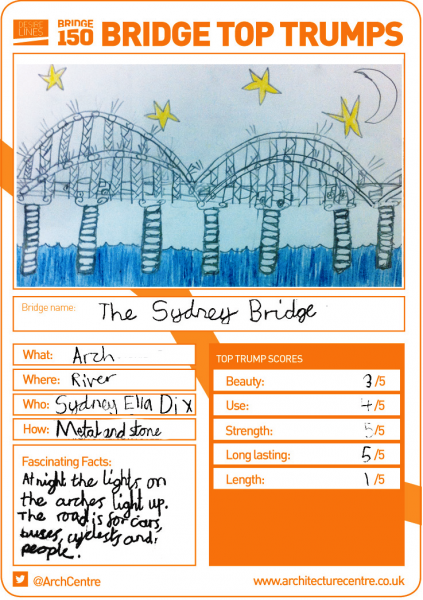 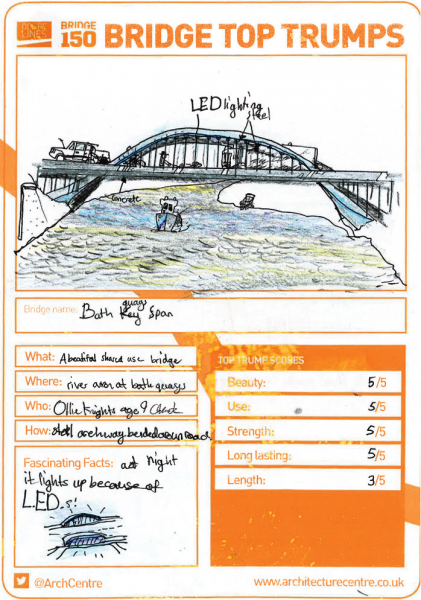 Use of the Top Trumps trade mark with the kind permission of Winning Moves UK Ltd.

The competition was run in collaboration with the Architecture Centre and the Bridge150 celebrations.