No single organisation has responsibility to manage flood risk from all sources. Flood Risk Management is shared between a number of different organisations with individuals and communities having an important part to play.

Outlined below are the different types of flooding that can occur in Bath and North East Somerset together with the relevant groups and organisations that have responsibility for managing flood risk.

Watercourse flooding, also referred to as fluvial flooding, occurs when water overtops the banks of a river, stream or drainage ditch. This can occur because there is more water draining into the channel than it can hold, or because it is blocked.

Main Rivers are identified on the Environment Agency’s flood maps and tend to be the larger rivers or systems. In Bath and North East Somerset Main Rivers include the Avon, the Chew, the Cam Brook and Wellow Brook.

The Environment Agency is the Risk Management Authority for Main Rivers.

Any watercourse that is not defined as a Main River is an Ordinary Watercourse and can include drainage ditches.

Also referred to as pluvial flooding or flash flooding, is rainwater, snow and other precipitation which runs across the surface of the ground and pools in low lying areas. To be classed as surface water flooding it must not have entered a watercourse, drainage system or public sewer. This type of flooding often occurs quickly during, or shortly after, a high intensity storm and is made worse by blocked ditches, drains and compacted or waterlogged soil.

The Council does not normally get involved in cases where flooding on private property is due to surface water runoff from another private property or land. This is a civil matter between the two landowners.

To be aware that an occupier of land is under no obligation to prevent water that has come naturally onto the land, and has not been artificially retained there, from passing onto a neighbour’s lower land. However, the lower occupier is under no obligation to receive the water and may put up barriers or otherwise pen back the flow of water even if this causes damage to the higher occupier, but the right to do so is not an absolute one and must be exercised reasonably. 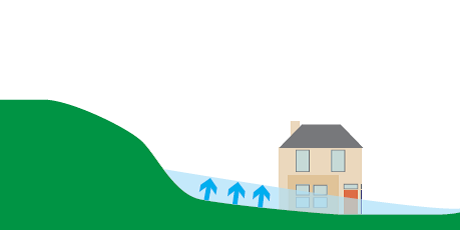 Bath and North East Somerset Council (as the Lead Local Flood Authority) is the Risk Management Authority for groundwater flooding.

Sewer flooding happens either when the pipes in the network are blocked or when there is heavy rainfall and the sewers cannot cope with the amount of water because they are not designed to cope with heavy, prolonged rainfall. The danger of this type of flooding is that water can become contaminated with raw sewage and enter land and property, or the river system.

Wessex Water is the Risk Management Authority for sewer flooding.

Reservoir flooding is extremely rare. It happens when there is a failure in the dam holding back the water as a result of erosion, accidental damage or water levels rising above/over-topping the dam. Whilst the risk is low, the resulting flooding can be very destructive.

The owner or operator of the reservoir will be responsible for its management. The Environment Agency is the Risk management Authority for flooding from reservoirs.

What the lead local flood authority do

What the LLFA do